Academy was founded about the time of a record breaking freeze in Albuquerque in 1971. Academy has been providing personable and professional service such as tenant remodeling, residential plumbing and commercial plumbing repairs and replacements in plumbing, heating, cooling and electric in Albuquerque and surrounding areas since 1971.

Jules F. Appelman founded Academy Plumbing in 1971. Jules started out by doing service calls out of his Alfa Romero. Jules is still very much involved in the company, he is a Certified Electrical Engineer, he is the Kohler Authorized representative repair technician for the state of New Mexico, Jules holds many licenses in New Mexico.

In December 2004 Academy became a Employee Owned Company, of which consist of Jules F. Appleman founder, Tim Starkey, Shelly Maez and Bill Collins. Which combined provides over 120 yrs of experience.

As an Employee Owned Company we strive to provide quality service in a timely manner treating your home as if it were ours. That’s why Academy Plumbing offers a 100% Guarantee on all of our plumbing, heating, cooling, and electrical services.

You may have seen us on KRQE Channel 13. That’s right! Academy Plumbing is the only plumber in Albuquerque worthy of the “Ask a Pro” status. Got questions about plumbing, heating or air conditioning? Ask us! 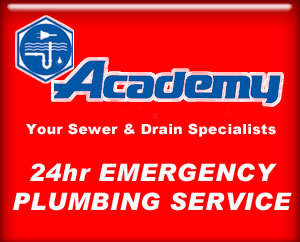 As an employee-owned company, we build long-term relationships with our customers through our honesty, integrity and commitment to our customers’ needs at reasonable and fair rates.

Since 1971, Academy Plumbing has been Albuquerque’s reliable plumber. We look forward to helping you too!

WE ARE AUTHORIZED DEALERS FOR: